Summer 2013 went by in a flash, but luckily we were able to kick-start the new school year with some awesome events at the Aztec Recreation Center and the Aztec Aquaplex to ease the transition back into school-mode!

The ARC started off the year with a bang at the annual ARC ’til Dark event on Sunday, August 25th. This yearly event is held in the gym and showcases a variety of on campus clubs and sports teams, giving new students a multitude of ways to get involved and have fun during their time as a student here at SDSU.

The ARC ’til Dark featured a live DJ, hundreds of boxes of free pizza from sponsors such as Woodstock’s, Milo’s and Papa John’s. We also had Shake Smart in house handing out samples of their awesome protein drinks, while KIND Bar was here giving away free samples of their tasty granola bars. Pita Pit was feeding hungry students with cookies and sandwich samples as well. With so many great food vendors offering free samples, it was near impossible to walk out of this event feeling hungry!

To go along with this year’s tropical theme, the ARC brought in a mechanical shark that drew quite the crowd. Students lined up to each have a go and see how long they could stay on this turning and spinning monster, only weeks after Shark Week too!

Perhaps the biggest draw of the ARC ’til Dark was the second annual Slam Dunk Contest. This contest showcased 11 different ARC members who used their hops to show off their best dunk for our panel of judges. The judges were Aztec Basketball legends Tim Shelton, DJ Gay, Chloe Johnson and last year’s reigning champ, Tali McLemore. The contest was hosted by A.S. President Josh Morse and ARC Marketing Lead Blake Pinsker.

The contest consisted of three rounds where each contestant had 45 seconds to wow the judges with their best dunk tricks. Contestants were eliminated each round, with the third and final round showcasing the top five dunkers. Tim Patrick took first place and secured himself three months of free membership at the ARC! 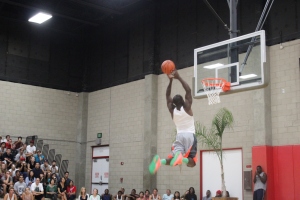 Aztec Recreation kept the fun going the following Friday, August 30th with the annual Aquaplex Pool Party! This event also had a live DJ and mountains of free pizza from Woodstock’s and Milo’s. Aztec Recreation welcomed all SDSU students to come kick back, tan, eat, listen to music and play in the many pools at the Aztec Aquaplex. For those brave enough, there was also a dunk tank that allowed participants the opportunity to dunk their friends if they were able to throw a ball at the target.

We had a blast at these events and hope they got the school year started in a great light!

Make sure to come by for our next event, an Open House at the ARC on Wednesday October 23rd!