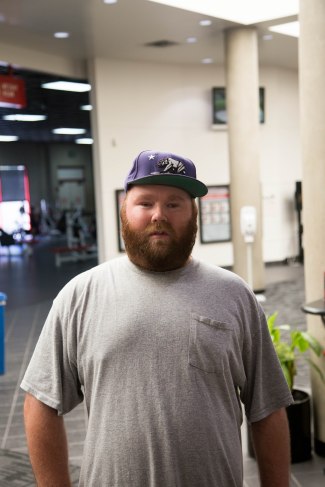 When asked what his life motto was, Tyler Farnsley replied with “Stay positive.” As a blind individual, Tyler says that staying positive is incredibly important, especially when people
are constantly thinking you can’t do something because of a disability.

Tyler proves the cynics wrong – he has been a member of Aztec Recreation for two years, taking public transportation almost daily to utilize the ARC cardio and fitness rooms. His father works on campus as a Professor in the School of Theatre, Television and Film, which helped Tyler’s select Aztec Recreation for his active lifestyle journey.

Aimee Orozco, Aztec Recreation Member Services Supervisor speaks highly of Tyler, “I have had the pleasure of knowing Tyler for the past two years…almost the entire time he has been a member with Aztec Recreation. He now knows me by the sound of my voice and greeting when he walks into the facility. Tyler is an extremely friendly person with a great attitude. He is an inspiration to many of us here at the ARC.”

Summer is a great season for enjoying Aztec Recreation membership. The air-conditioned ARC is open daily. Aquaplex, Aztec Lanes, ARC Express, tennis and racquetball are all available in the summer. Plus, the popular membership programs including Group Fitness, climbing and Intramural Sports are offered in the summer, as well. Check out the membership options to match your needs.

Graduating or Leaving SDSU, but staying in San Diego?

Aztec Recreation automatic monthly memberships are grandfathered. If you are paying a student rate, that rate does not increase after graduation. Keep your membership, keep your fitness routine and keep your same low rate!

Leaving SDSU this summer and returning in the fall?

Freeze your membership.Freezing places your membership and billing on hold from June 1 – August 14. You regain access to facilities on August 15 and billing is reinstated September 1. This program saves you hassle and money, too.

Please be aware that automatic monthly billing memberships do not cancel automatically. If you wish to cancel, plan ahead and submit your online form by the 24th of the month. No action is required if you are an ALI student or are currently living in the residence halls.

Living in the Res Halls and Staying on Campus this Summer?

Prepaid membership for residence hall students expire on May 31, 2016. If you are living in the Res Halls again next year, you can purchase a short-term 3-month membership. If you don’t plan to move back into the halls, start your student membership for $19 per month. To register, sign-up in person at the ARC or Aquaplex.

We’ve got a brain scratcher for you: 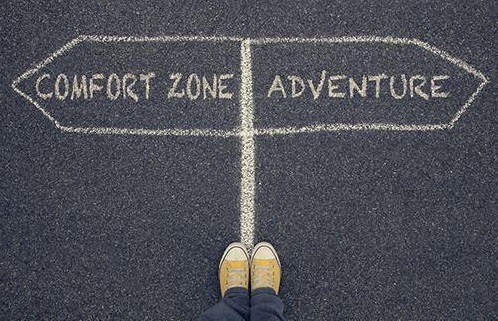 comfort zone. That is why we encourage all our Aztec Recreation members take a risk and try some of the ENS/ Credit Classes. From salsa dancing, rock climbing, to that surfing class you’ve been dying to try since your freshman year, we highly encourage you to wait no longer.  A great way to break you out of your mundane routine is to do something you’ve never done before, or try something you’ve never tried. Wake your brain up and tell it that you’re not just here to go through the motions. You’re here for a purpose! Break out of routine and fall in love with a new hobby.

DRUM-ROLL please! The list of our ENS/ Credit classes is finally here.

We are especially excited to announce some of our newest class additions this fall semester highlighted in red. Did we forget to mention.. You get CLASS CREDIT for the ENS classes?!

Steps to register:
1. Login onto webportal.
2. Search for classes under Exercise and Nutrition Science (ENS) lists.
3. Register for class and time slot that works best.
4. A syllabus will be sent to your email regarding further details. The ARC Fitness Room was upgraded in the summer of 2015 with numerous Hoist cross cable machines as well as Life Fitness®, Paramount® and Cybex® selectorized circuits. Cross cable equipment enables you to perform a huge range of exercise and also supports high speed movements for functional training. Check out our video blog with oblique training tips on cross cable. All the selectorized machines complete three full circuit sets and many support unilateral movement to help build strength and symmetry in your workout. The Cybex® Total Access line-up accommodates exercisers of all abilities and allows wheelchair access. The Life Fitness® machines include rep counters and timers as well as QR codes linking you to specific instruction to use the machines for peak results.

Jenna McGuigan can squat 255 lbs! This fit, buff, young woman is a sophomore at SDSU who works out 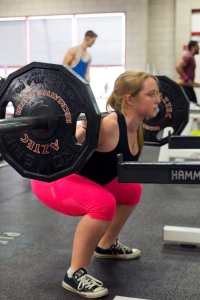 at the ARC most days of the week. “I didn’t get it [255 lbs.] the first time I tried,” Says McGuigan, “But I got it the next time.” McGuigan is smart, systematic and focused. Reaching 255 took less than two years of training.

Jenna is a fascinating Aztec who believes that strong women are beautiful.  “With lifting weights and getting stronger I realized how empowering and enlightening it can be to feel like you can do anything.”

The structure of McGuigan’s workout involves five one-two hour sequences that she does daily: Chest day, Back day/ Deadlifts, Shoulder-Calves, Leg Day/Squats, and Arm Day. She will take off some days if she is feeling run down.  In the case of skipping days, Jenna starts back where she left off.  Jenna’s dedicated efforts include getting up at 5:30am daily, running two miles, preparing food and everything she needs for the day, and then heading campus and starting with her ARC workout.

Reaching goals in the gym is natural for McGuigan who has a vision for her future in the field of prosthetics because she loves helping people. She studies physics at SDSU, volunteers for Coaching Corps, and is working on a biomechanical research project studying the elderly with Dr. Levy in Kinesiology. She is only a sophomore but says, “I want to get the most I can from being here at SDSU.” McGuigan says that she is motivated by her professors and she feels respected by them because they recognize her drive.

McGuigan’s greatest inspiration has come through hardship. After being infected with Lyme’s disease, McGuigan’s mom became physically handicapped in 2009, creating a sense for Jenna to never take anything for granted. It also was during this time when Jenna learned how to cook, which is a skill that helps her stay on track with her wellness regimen now. McGuigan sees working as a volunteer in coaching corps as inspirational for both herself and the kids she coaches; “Many of the kids are from families going through financial hardship and don’t have opportunities. For them, the time we spend doing sports and fitness is an important memory.” McGuigan was elected next year’s Coaching Corp president and is it any wonder that the SDSU chapter of Coaching Corps is one of the fastest growing chapters in the country?

Jenna says some of her greatest inspirations have come from realizing how good she has it and making sure she takes advantage of that good fortune. From this sense of gratitude, her personal motto is: “The rest is up to you.”

Nicole Widmer joined the Aztec Recreation team as Associate Director for Member Services and Facilities on September 29th. Nicole was previously at UCLA where she had been serving as the Assistant Manager of Pauley Pavilion. Nicole brings a wealth of experience in the recreation industry to the role including the leadership, management and oversight of large scale recreation and athletics facility management, renovation and construction, recreation program development and fiscal oversight, staff supervision and development, high profile event management, marketing and communications, risk management, and experience with large scale facility construction and renovation projects. In addition to her experience in Campus Recreation, Nicole previously served as a program director for YMCA of San Diego. Nicole holds a Master’s degree in Teaching and Teacher Education from the University of Arizona where she also served as the graduate assistant for Intramural Sports and Special programs. She earned a Bachelor’s degree in Liberal Studies from CSU Pomona.

Pam Mahlow, Aztec Recreation’s new Associate Director of Programs joined the team on October 20th from Stanford University where she had been serving as the Associate Director of Recreation for Sports and Physical Education. Pam brings fourteen years of experience across campus recreation, athletics and physical education to the new role including the leadership, management and oversight of club sports, intramural sports, youth camps, credit classes, aquatics, and special events. In addition to her recreation experience, Pam brings substantial project management, grant writing, assessment and reporting experience from her tenure as a Research Coordinator with the Center for Health Policy at Stanford’s School of Medicine. Pam holds a Master’s Degree from the University of Maryland, College Park in Kinesiology – Sport Psychology, and a Bachelor’s degree in Physiological Sciences from UCLA. 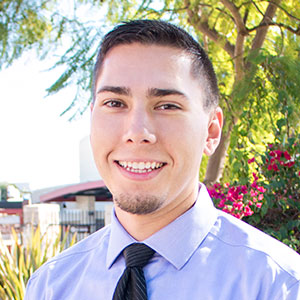 Antero “AJ” Gonzalez started in his new role as Facility Supervisor September 15th. AJ holds a Master’s Degree in Sport Management from Eastern Michigan University where he served for two years as the Graduate Assistant for Facilities for the Department of Campus Recreation. He previously served as a Facility Supervisor as well as an Intramural Sports Supervisor for the Department of Campus Recreation at the University of Kansas where he earned a Bachelor’s degree in Sport Management. AJ brings excellent experience in the areas of facility scheduling, facility operations, special event management, recreational sports programming and student development to our team.