Kyle Reynolds has been an Aztec Recreation member since he was a freshman at SDSU. He says that freshman and sophomore year his favorite facility was the ARC, hands down, but once he visited Aztec Lanes, that’s where you could find him from then on out. He’s at the

Lanes several times a week, and because he has his own shoes, he bowls completely free of charge.

After joining, Kyle discovered Aztec Recreation’s Intramural Sports leagues. Growing up, Kyle played basketball, soccer, baseball, and golf, so it was important to him to be able to continue to participate in competitive sports. Aztec Recreation Intramural leagues allowed him to do just that; he joined and became captain of both a dodgeball team and a softball team, and went on to win championships in both of them with the help of his fraternity 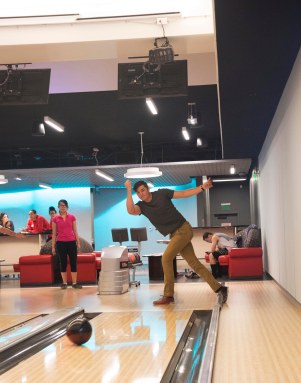 brothers. Kyle lives by the quote, “Life’s short, work hard, play harder,” and he lives well by maintaining a clean diet, focusing mainly on eating chicken, vegetables and fruits as much as he can. He golfs and hikes when he can find time between school, bowling, the gym, and his job.
Kyle’s father also graduated from SDSU and he is following in his father’s footsteps as an Aztec for Life. He plans to stay connected to the campus through the many friends he’s made through being a part of Aztec Recreation and Greek life here at SDSU. Thanks for being an awesome member, Kyle!